IN THE SECRETARIAT YOU WILL BE GIVEN THE COMPETITION PROGRAM, THE IDENTIFIER AND DINNER VOUCHERS. CHECKING-IN IN OUR SECRETARIAT IS MANDATORY FOR EVERYONE.

PARTICIPANTS IN THEIR INDIVIDUAL AGE CATEGORIES WILL PERFORM IN AN ALPHABETICAL ORDER STARTING FROM A LETTER DRAWN BY THE COMMITTEE: H

DURING THE AUDITION ROUND PARTICIPANTS WILL PERFORM ON STEINWAY&SONS MODEL A 188 EP PIANO.

In addition to the main prizes and distinctions, special prizes were also traditionally awarded for example in the form of concerts, sheet music and other gifts.

CATALOGUE OF THE COMPETITION 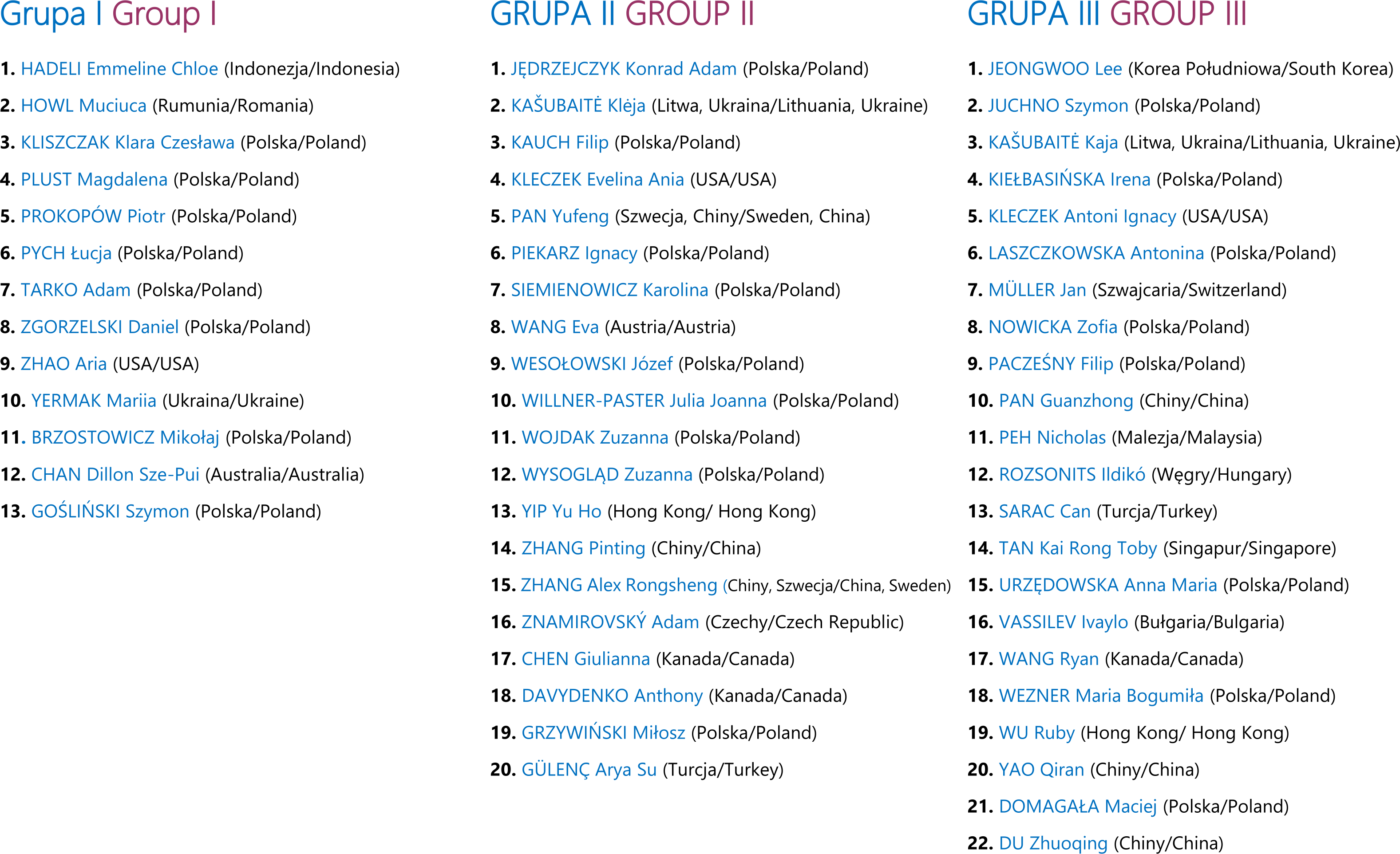 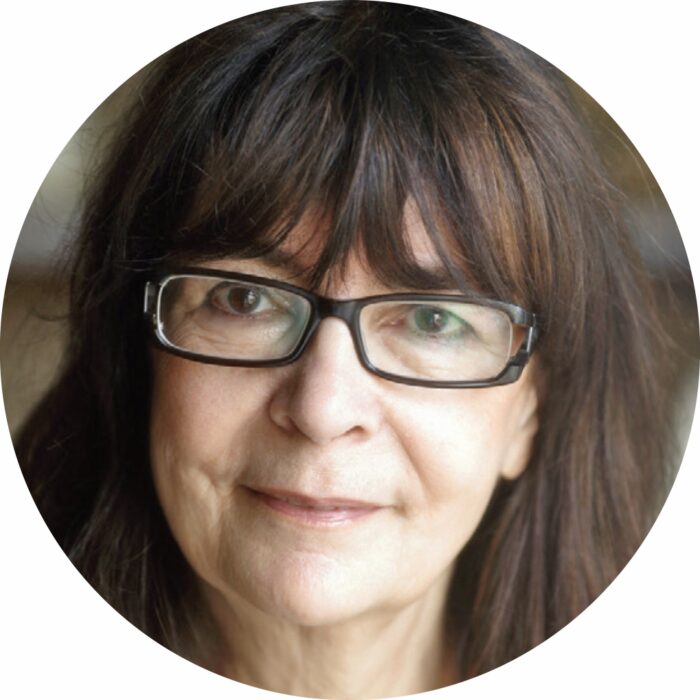 Katarzyna Popowa-Zydroń, a Polish pianist of Bulgarian origin. Graduated with distinctions from a class conducted by professor Zbigniew Śliwiński at the Higher State School of Music in Gdansk (presently Stanislaw Moniuszko Academy of Music in Gdansk). She did her postgraduate studies at the Hochschule für Musik und darsteilende Kunst in Vienna in a class conducted by professor Alexander Jenner. She participated in master classes conducted by Susanne Roch, Dieter Zechlin and Georgy Sebok. Katarzyna Popowa-Zydroń gives concerts in Poland and abroad. She was awarded with a medal of the National Education Commission and in 2005 with Gloria Artis medal and the Officer’s Cross of the Order of Polonia Restituta. Presently she is a piano professor at the Academy of Music in Bydgoszcz. She is invited to conduct master classes in Poland and abroad, seminars for piano teachers and open lessons and consultations. She cooperates with the Centre of Artistic Education in Warsaw. She has been a jury member for numerous Polish and foreign competitions. Her students receive best awards in piano competitions in Poland and abroad, gave numerous concerts and some of them are successful in teaching in Poland and abroad. Her students include, among others, Ewa Jasińska, Krzysztof Herdzin, Rafał Blechacz, Michio Nishihara Toro, Takayuki Hirata, Paweł Wakarecy, Michał Szymanowski, Szymon Nehring. Since 2015, she has been the chairman of the International Fryderyk Chopin Piano Competition in Warsaw. 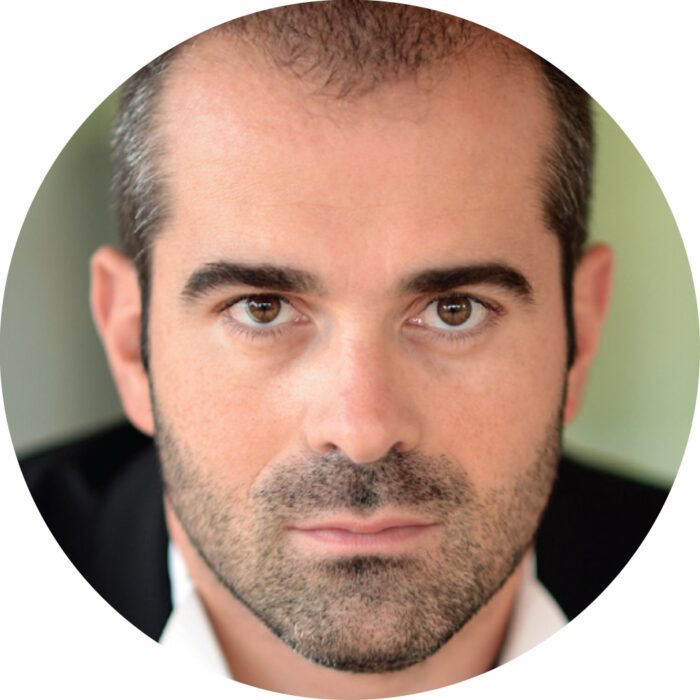 Alberto Nosè was born in Villafranca di Verona, Italy in 1979. He is the winner of the First Prize, the Gold Medal and the Sony Audience Award during the 15th International Piano Competition „Paloma O’Shea” in Santander (Spain) in 2005. He began his piano studies at the F.E.Dall ‚Abaco Conservatory in Verona in the class of Prof. Laura Palmieri and graduated with the highest marks and distinction at the age of 17. He continued to study with Prof. Franco Scala, Borys Pietruszański and Leonid Margarius at the International Piano Academy „Incontri col Maestro” in Imola and in 2005 he received the title of Piano Master. He also participated in masterclasses led by Maurizio Pollini, Murray Perahio, Andrzej Jasiński, Michael Dalberto, Luis Lorti, Michael Beroff, Alexander Lonquich, Arie Vardi, Fou Ts’ong, Karl-Heinz Kämmerling, Alfonso Kontarski, Paul Bzdura-Skoda. Alberto Nosè achieved his first successes at the age of 11, winning the First Prize at the Jugend Für Mozart International Competition in Salzburg and then he toured Italy, Austria and France for the first time. In the following years, he won further awards at prestigious international piano competitions, such as the Chopin Competition in Warsaw (5th Prize in 2000 and 3rd Prize in 1999), May Lind in Helsinki (1st Prize in 2002), Long-Thibaud in Paris (2nd Prize in 2004), Vendôme in Piargi (1st Prize in 2000), World Piano Competition in London (2nd Prize in 2002), European Competition Luciano Dante in Pordenone (1st Prize in 2002), Premio Venezia (1st Prize unanimously in 1998). These successes have contributed to the flourishing of his career and numerous performances in Europe and around the world. In 2008, Domovideo released a record with piano pieces by Mozart and Beethoven, recorded on the occasion of 250. Mozart’s Birthday in 2006 and broadcast by the SKY Classica Channel. In the same year, Naxos released a record with Six Sonatas op. 17 by Johann Christian Bach. This performance was the world premiere of these pieces on a contemporary piano. 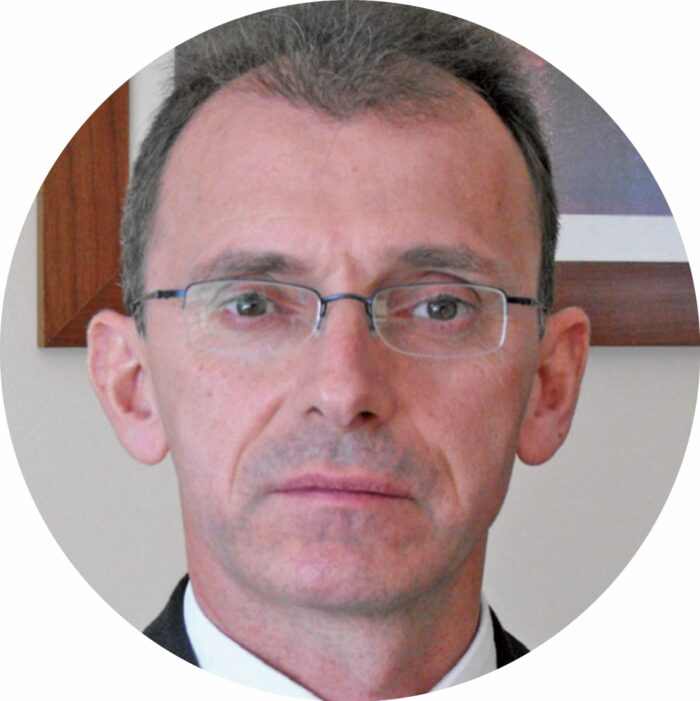 Jordi Benseny Plaza is a piano teacher at the Conservatory of Music in Lleida (Catalonia, Spain). He studied in his town of Lleida with professor Alicia Font, and consistently achieved the highest grades. He graduated at the Liceu Conservatory of Music in Barcelona, where he was a student of professor Margarida Serrat. He continued his studies with other teachers in Barcelona under Leonid Sintsev, Antoni Besses, Àngel Solé and Stalisnav Pochekin. He has performed concerts in his country and abroad, especially as a solo pianist. He also has a degree in Spanish Philology by the Universitat Central of Barcelona. When he was a student he received several scholarships, by the regional government Provincial Council, by the University and by the Goethe Institut. His teaching career was developed at the Liceu Conservatory in Barcelona, at the Balaguer Conservatory and later until now at the Lleida Conservatory of Music. Until 2012 he was a member of the direction of the Conservatory in Lleida. Several of his students have followed his career in different high music schools in Europe and have won prizes in important piano competitions. Jordi Benseny has constantly been a juror in the Ricard Viñes International Piano Competition in Lleida since the outset of establishing the competition. Presently, he is the chairman and organizer of this competition and also of another international piano competition focused on young hopefuls: the Ricard Viñes Piano Kids and Youth. 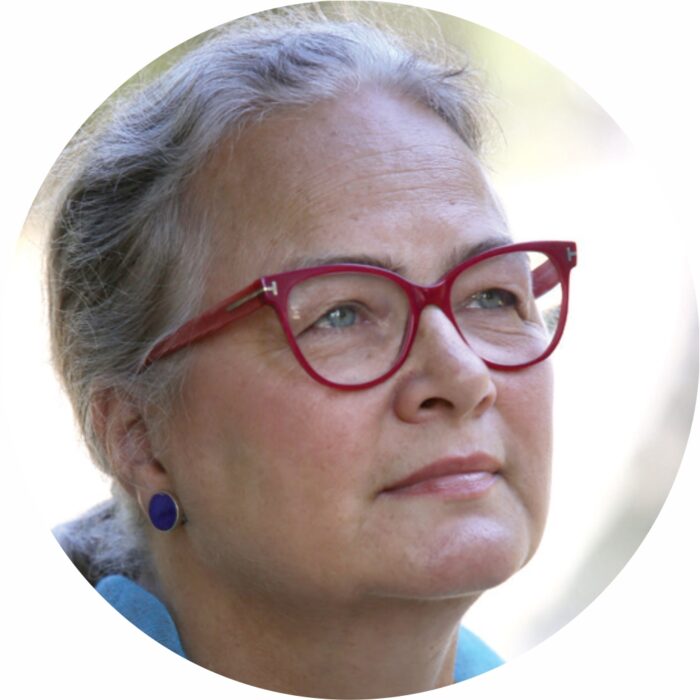 Ewa Pobłocka is a prize-winner of the 10th International Fryderyk Chopin Piano Competition in Warsaw (1980). She won First Prize in the International Viotti Music Competition in Vercelli (1977) and the gold medal in the International Festival of Young Laureates in Bordeaux (1979). Pobłocka studied at Gdańsk Music Academy, graduating with honours in 1981. She completed post-graduate studies with Conrad Hansen in Hamburg (1982) and benefited from consultation with Rudolf Kerer, Tatiana Nikolaieva and Martha Argerich. Ewa Pobłocka has performed throughout Europe and the Americas, as well as in China, Indonesia, the RSA, Singapore, South Korea, Japan and Australia. She has played as a soloist with many renowned orchestras and conductors. She is an accomplished chamber musician as well. She has given numerous first performances and made world premiere recordings of works by Polish contemporary composers. She has worked with European radio stations and recorded more than 50 discs for Deutsche Grammophon, Polskie Nagrania, CD Accord and Bearton, among others. Many of her recordings have won prizes and critical acclaim. As a distinguished pedagogue, she is the head of the Piano Department at the Academy of Music in Bydgoszcz. Pobłocka has given numerous master classes all around the world. She has been a jury member of many international piano competitions, such as the Chopin Competition in Warsaw, Artur Rubinstein Competition in Tel-Aviv and Competition in Hamamatsu, among many others. Ewa Pobłocka also willingly devotes herself to literary activities – her first book, ‘Forte-piano’, was released in 2021. Since 2020, she has been running the broadcasts ‘Start with Bach’ and ‘Bach’s Cases” in Polish Radio. She is the first Polish pianist in history to record both volumes of Das Wohltemperierte Klavier by Bach. Recently she has performed both the volumes during the recitali series in Wigmore Hall (2021, 2022), among others. 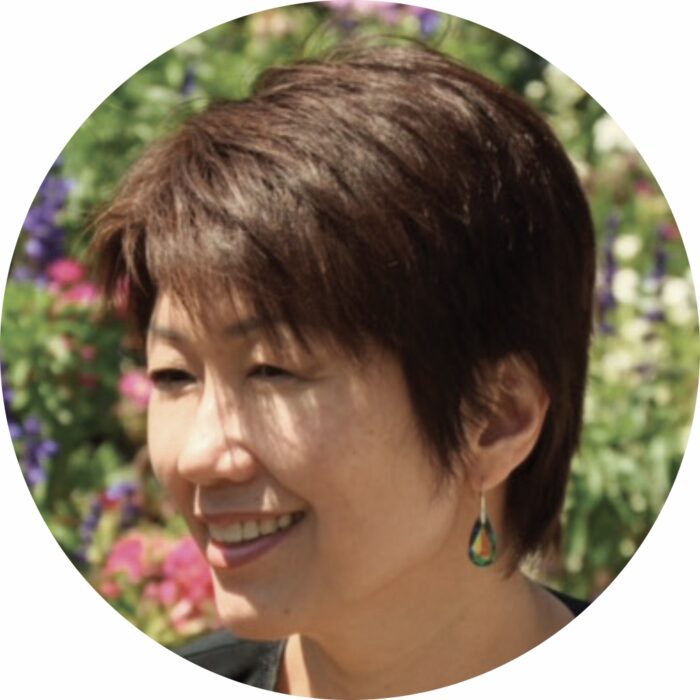 HunJu Sohnn Korean born pianist, has been performing solo and chamber music concerts throughout the United States as well as in South Korea, Thailand, Costa Rica, England, Germany, France and Switzerland. Highly appreciated for her qualities in collaborative work, HunJu has often been invited to appear with various instrumentalists and performed with a wind ensemble called Ensemble Five, as well as the European-based Varias Ensemble at the New Year’s Music Festival in Gstaad, Switzerland. She continues in her post as pianist/coordinator of masterclasses at the Verbier Music Festival and Academy. Ms. Sohnn participated in a television documentary featuring Nobuko Imai, which was distributed world-wide and performed with Ms. Imai for France Musique Radio. HunJu Sohnn resides in Geneva, Switzerland and continues to perform in Europe and the US, while holding a teaching position at the Conservatoire Populaire de Musique Danse et Théâtre in Geneva. She has collaborated on stage with several of the winners of the Geneva International „Concours d’Exécution Musicale”; their performances have been transmitted live for the Radio Suisse Romande. She also participated in studio recordings, most recently in a project of complete works for piano and winds by Francis Poulenc released by Kleos Classics. HunJu Sohnn received her Master’s degree from New England Conservatory and holds a Doctoral degree for Piano Performance from Rice University. Her teachers include John Perry, Russell Sherman and Robert Roux. 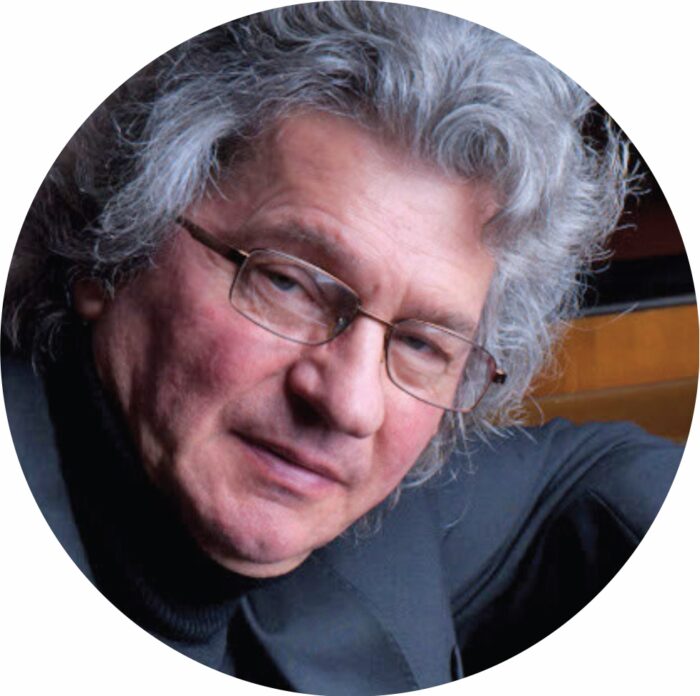 Andrzej Tatarski completed his piano studies and graduated with distinctions from a class of Professor Olga Ilwicka-Dąbrowska of the Academy of Music in Poznan. He improved his piano skills during his postgraduate studies under the supervision of Professor Vlado Perlemuter in Paris. He has been conducting his artistic activities as a solo and chamber pianist for years. Andrzej Tatarski has performed in countries of Europe, America and Asia. He participates in renowned music festivals such as the Poznan Musical Spring, Warsaw Autumns, Karol Szymanowski’s Music Days in Zakopane, Wratislavia Cantans, Festival of Polish Piano Music in Słupsk, Festival of Polish Contemporary Music in Wroclaw and International Chopin Festival in Duszniki. He made a lot of first performances of contemporary works of Polish composers. His artistic works included numerous archival records for Polish and foreign radio stations, records and television and film performances. The artist sits on juries of Polish and international piano competitions, such as, among others, the Polish Chopin Competition held in Warsaw, the Ignacy Jan Paderewski International Competition held in Bydgoszcz and International Competition of Piano Duets held in Bialystok. He lectures during master classes in Poland and abroad. He was also a head of the Chamber Music Chair and Piano Chair in the I. J. Paderewski Academy of Music in Poznan, where he has conducted a piano class for many years.

There is a possibility of additional piano practices in Toruń, Golub-Dobrzyń and Kowalewo Pomorskie from 18th to 21st May.

The Organiser provides a lunch for the participant on the day of the audition in the Chopin Centre in Szafarnia.

There is a possibility to buy lunches. (price: 30 PLN)

Ladies and Gentlemen, below we present a list of participants qualified to the 29th International Fryderyk Chopin Piano Competition for Children and Youth in Szafarnia:

List of participants qualified to the 29th International Fryderyk Chopin Piano Competition for Children and Youth in Szafarnia:

Qualifiers will receive an email this week with a written confirmation of their participation and further details about the Competition. Unqualified persons will be reimbursed in the near future. We encourage you to apply for the next, jubilee 30th IPC in Szafarnia.

please be advised that registration for the 29th International Fryderyk Chopin Piano Competition for Children and Youth has come to an end. We hope everyone managed to register. Please be advised that if the form is missing, we will contact you with a request for supplementation. If you have noticed any errors in the application, please provide us with a corrective message.

We wish everyone good luck in qualifying for the competition. We will announce the results of the elimination on April 4, 2022.

below we publish the names of the jury of the 29th International Fryderyk Chopin Piano Competition for Children and Youth in Szafarnia:

below we publish the rules and the application form for the 29th International Fryderyk Chopin Piano Competition for Children and Youth in Szafarnia.

The competition will be held on 19-22 May 2022. The jury will be chaired by prof. Katarzyna Popowa-Zydroń. The remaining names of the jurors will be made public by December 31, 2021.

The inaugural concert will take place on May 18, 2022 in the Chopin Centre in Szafarnia. Kamil Pacholec – finalist of the 18th International Frederic Chopin Piano Competition in Warsaw will be the soloist of the concert.

The deadline for submitting applications is March 15, 2022. The list of participants will be published on April 4, 2022. 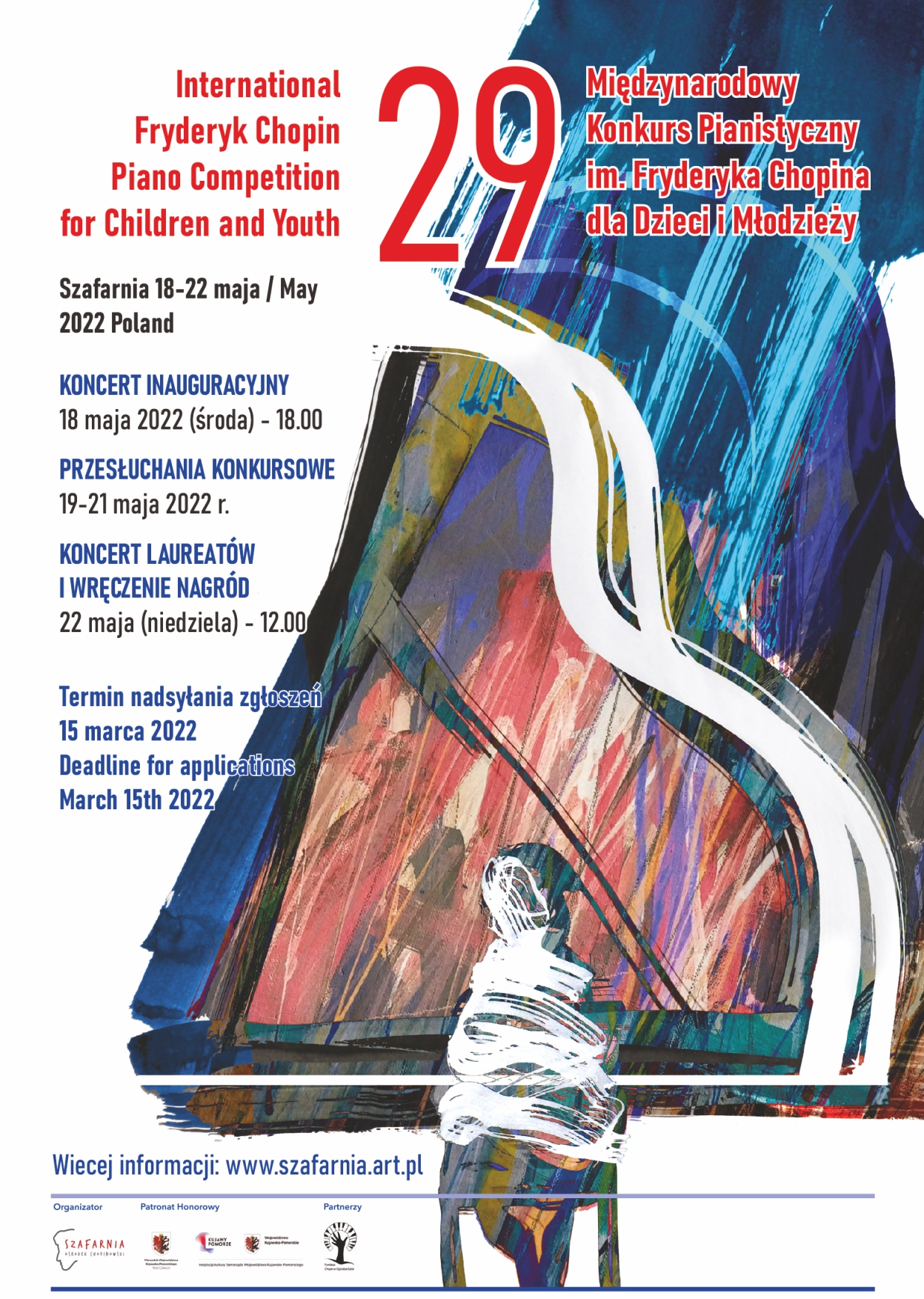